Application of emulsifiers/stabilizers in dairy products of high rheology

The role played by low molecular weight emulsifiers (mono- and di-glycerides) and non-dairy stabilizers (alginates, carrageenan, gums and gelatins) in the formation and stabilization of liquid milk (and specifically a functionalized milk containing omega-3), yoghurt and ice cream has been reviewed. Attention is given to the interactions that may occur between the reactive sites on polysaccharide stabilizers and milk proteins and other milk components, and to the desirable characteristics, e.g., viscosity/consistency, appearance and mouthfeel, body and texture, imparted to yoghurt and ice cream by addition of emulsifiers and gums.

The utilization and functionality of stabilizers in food products is not new; they have been used for more than half a century. However, it is only in more recent years that a wide range of new dairy products that rely, to a large extent, on the functionality of stabilizers have been introduced [1]. One of the major objectives of dairy manufacturers are to produce dairy products that have desirable quality attributes (appearance, texture and flavor) over a sufficient shelf life. In order to achieve this objective, dairy manufacturers have been utilizing ingredients such as stabilizers to improve the kinetic stability of food emulsions. An emulsion is defined as a dispersion of droplets of one immiscible liquid in another in the presence of stabilizer molecules, called emulsifiers.

Fig. 1. Schematic diagram of food emulsions: (a) oil-in-water emulsion and (b) water-in-oil emulsion

providing colloidal stability to the droplet by forming an electrically charged layer at its interface with the continuous phase and lowering the interfacial tension, thereby making droplet formation less energy intensive. The hydrophilic/lipophilic structure of an emulsifier facilitates its concentration at the interface between immiscible liquids, where it forms an interfacial film. Food emulsions are either oil-in-water (o/w) emulsions (Fig. 1a), e.g., liquid cream or milk, in which oil is the dispersed phase, or water-in-oil (w/o) emulsions (Fig. 1b), e.g., margarine, in which water is the dispersed phase and oil the continuous phase. Low molecular weight emulsifiers (e.g., mono- and diglycerides) and non-dairy stabilizers (e.g., alginates, carrageenans,gums and gelatins) are used in many dairy products . 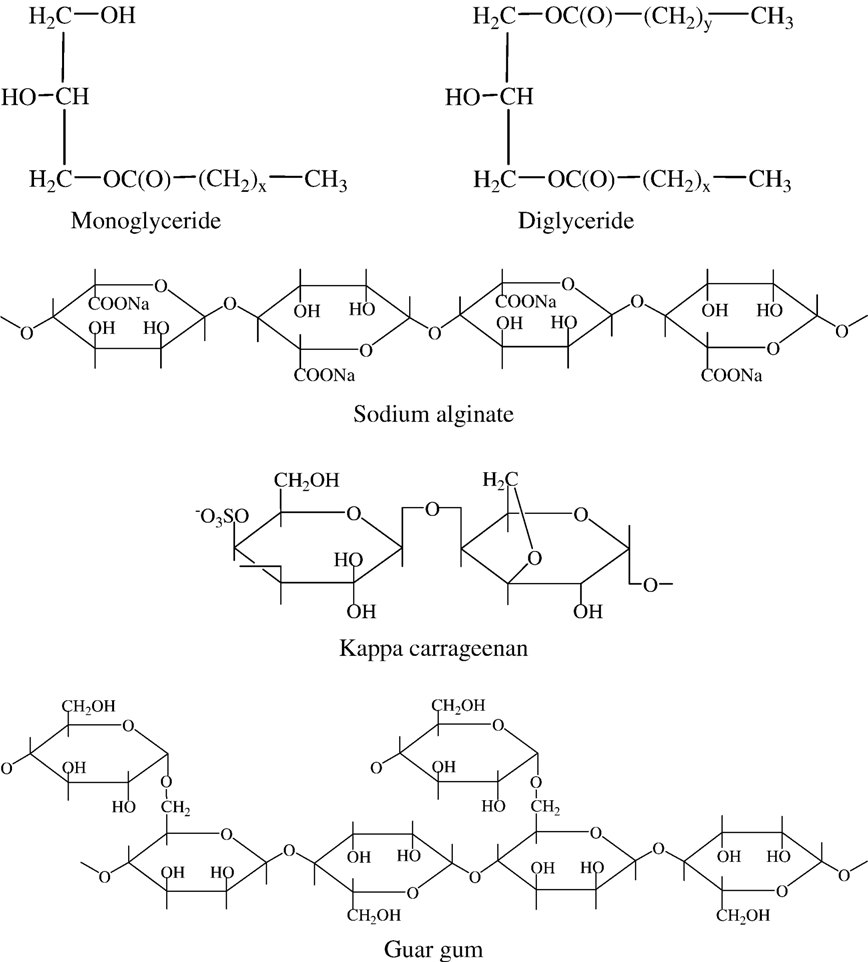 Fig. 2. Structures of the emulsifiers/stabilizers used in formulation of omega-3 fortified milk. X and Y are typically >14.

Emulsifiers are used to stabilize the oil in water emulsion and are used most often in combination with stabilizers in formulation of beverages. The high water binding capacity of stabilizers provide a thickening and gelling effect in dairy products such as yoghurt, and maintains product stability during manufacture and storage of other dairy products. Some polysaccharide stabilizers act synergistically with milk proteins and other milk components. The role of the interacting polysaccharide needs to be considered during manufacture of dairy products. A general example is the synergy that exists, through a specific interaction, between kappa carrageenan and kappa casein that may be used in dairy applications where gel strength is required. However, both the type of emulsifier or stabilizer and the timing of their addition during the processing of dairy products can influence the properties of the product.

Fig. 2. Structures of the emulsifiers/stabilizers used in formulation of omega-3 fortified milk. X and Y are typically >14.

Milk is a complex food emulsion as well as a colloidal solution. The emulsion component is composed of fat droplets dispersed in an aqueous phase containing protein. The protein is in the form of both casein micelles, which themselves are colloidal particles, and as monomers of whey protein in solution. Milks containing a range of fat contents, those with low or reduced lactose content, and those fortified with nutrients such as vitamin A, vitamin D and calcium, all possessing a satisfactory shelf-life and taste quality, are readily available.

Fortification of milk with functional food ingredients, such as omega-3 fatty acids, has been limited by the susceptibility of the polyunsaturated fatty acids to oxidative rancidity, but this problem has been overcome by the use of an appropriate combination of emulsifiers and stabilizers.  Research carried out by Lal ,involved incorporation of omega-3 fatty acids in a low-fat (1%) milk. Stabilization of this commercially available omega-3 milk was accomplished by the appropriate use of an emulsifier/stabilizer system, composed of mono- and di-glycerides of fatty acids, sodium alginate, carrageenan and guar gum (Fig. 2).

Among the most common emulsifiers used in milks are mono- and di-glycerides of fatty acids (Fig. 2). Mono- and diglycerides consist of esters synthesized via catalytic transesterification of glycerol with triglycerides, with the usual triglyceride source being hydrogenated soybean oil; they are also synthesized directly from glycerol and fatty acids under alkaline conditions . The mono- and di-glycerides of fatty acids that are incorporated into the milk participate in formation of the milk-fat globule membrane that is required to cover the increased surface area of the fat globule derived during homogenization of the milk.

Alginates are the principal structural polysaccharide component of the brown seaweed Phaeophyceae. They are present in seaweeds as mixed salts of sodium, potassium, calcium and magnesium.

Among the polysaccharides, sodium alginates (Fig. 2) are particularly adaptable as emulsifiers, because they offer the possibility of developing a range of textures, depending on the type of alginate. Sodium alginate is known as an ionic stabilizer. It is Coldwater soluble and acts as a thickening agent. The problem often encountered with the use of sodium alginate is its inability to dissolve in a high calcium environment, but this deficiency is often overcome by use of a sequestrant such as citric acid. Carrageenans are extracted from certain red seaweeds of the class Rhodophyceae and three different types are clearly identifiable; kappa, iota and lambda carrageenan. Kappa carrageenan (Fig. 2) was used in Lal’s formulation of the omega-3 milk .

The polymer chains in the structure are based on galactose and anhydrogalactose with varying amounts of naturally occurring sulfate linkages. In order to maintain a homogeneous suspension that is stable during storage, a thixotropic system is necessary . A thixotropic system is one that re-forms its network structure, if undisturbed, and the suspension is permanently stable and homogeneous. The surface of the kappa carrageenan molecules has several reactive sites that are able to react with the casein micelles in the milk. The reaction takes place during heating. The ends of the carrageenan molecules become associated with each other and form an effective matrix, which traps the kappa casein micelles, thus forming a thixotropic gel . The thixotropic gel prevents the formation of a cream line in the modified milk by slowing down the coalescence and separation of the fat globules.

Guar gum (Fig. 2) is an efficient thickening agent. It dissolves almost completely in cold water to give opalescent pseudo plastic solutions, which delay the sedimentation of solids or the creaming of fats. Addition of guar gum increases viscosity without rendering the product unpalatable.

Although emulsifiers and stabilizers aid in the processing of fortified milk, processing conditions such as homogenization and pasteurization is equal in importance to the emulsifier/stabilizer combination for successful formulation of a fortified milk.

Yoghurt is the best known of all cultured milk products and the most popular in almost every country. Yoghurts usually contain 10–13% non-fat milk solids and 0–3.5% fat. In set and stirred yoghurts, the milk ingredients impart gel strength or viscosity and water binding properties.The primary aim of adding stabilizers to yoghurt is to enhance desirable characteristics, e.g., viscosity/consistency, appearance and mouthfeel, body and texture, and they are often used in low calorie yoghurts.

Some of the stabilizers used in yoghurts are natural and modified gums, seaweed extracts (carrageenans, alginates) and gelatin. As these ingredients have the ability to form gel networks, their incorporation allows production of yoghurts, with firm texture and good resistance to syneresis, and with lower levels of milk solids. A food colloid, such as yoghurt, is an example of particle gels, and the hydrocolloids used in yoghurts function as gelling or thickening agents as well as stabilizing agents.

Due to the presence of hydrogen or carboxyl radicals, or to the presence of a salt possessing the power to sequester calcium ions, the molecules of stabilizer are capable of forming a network of linkages between themselves and the milk constituent (s). According to Ingenpass and Dexter, the negative groups are concentrated at the interface and the binding of water into the basic mix is achieved by the stabilizer according to the following sequence. The water is bound to components in the mix as water of hydration. Binding of water to milk constituents (proteins) increases their level of hydration, thereby stabilizing the protein molecules and allowing them to form a network that retards the free movement of water.

Stabilizers are used in yoghurts as a single compound or as a blend. The objective of blending stabilizers is to achieve a specific function, or in the majority of cases, to overcome one of the limiting properties associated with a specific compound. A single stabilizer may be suitable for the manufacture of fruit flavored yoghurt but may not be suitable, on its own, for the manufacture of other types of yoghurt. Hence, the selection of a particular type of stabilizer is dependent on aspects such as functional properties, the effect or mode of action of the stabilizer and the optimum concentration to be utilized.

Ice cream has been identified as a complex-colloidal system and is comprised of 10–17% milk fat, 13–17% sugar, 8–11% non-fat milk dry mass (lactose, proteins, mineral salts), 0.2–0.5% stabilizers/emulsifying agents and the main component, water. The manufacture of ice cream commences by formulation, pasteurization, homogenization and cooling the emulsion premix, followed by aeration and freezing the premix in a rotating cylindrical sieve whose external surface is continually scraped with blades to remove the extruded frozen product prior to packaging. Blends of emulsifiers and stabilizers designed to function best in full-fat, low-fat or nonfat ice creams are utilized. Although used at a fraction of a percentage, emulsifiers produce dramatic body and textural effects in ice cream low in fat. Emulsifiers added to ice cream have several important functions, such as controlled fat destabilization, reduced whipping time, increased resistance to melting and shrinkage, and improved dryness.

The taste and texture of ice cream are established by the two interfaces (Fig. 3), fat/water interface and the air/water interface, and proteins. Mono-glyceride is a common emulsifier used in ice cream. Mono-glycerides compete with milk proteins at both the fat/water and air/water interfaces and are responsible for the partial destabilization of the fat emulsion. Denatured milk proteins partially destabilized fat and agglomerated fat globules assist in the stabilization of the air/water interface. Polysaccharide stabilizers are often incorporated into ice cream mix to retard the formation of large ice crystals during storage, as well as to provide a more desirable body and texture to the final product.

The advent of the exciting new range of dairy products of high rheology now available, namely liquid milk (and specifically functionalized milk), yoghurt and ice cream, has only become possible by incorporation of emulsifiers and stabilizers into these food colloids. The combination of emulsifiers and stabilizers has proven to be effective in formulating functionalized liquid milk.

Cultured milk products such as yoghurts require the addition of stabilizers in order to enhance desirable characteristics such as viscosity, appearance, mouthfeel and texture. Addition of relatively low percentage of emulsifiers to low-fat ice cream provides excellent body and texture. An understanding of the chemical and physical interactions of these additives with the caseins, proteins, lipids and water in the native milk is important in the development of further functional and flavored dairy products.